This blog is dedicated to expanding and enriching the understanding of the legacy of the late artist, designer and architect Jan Sawka. It is curated by the Hanka and Hanna Maria Sawka. The blog will host a combination of research and information from the artist’s archive, as well as guest posts from scholars and art professionals. Posts will be released on a bi-monthly basis. 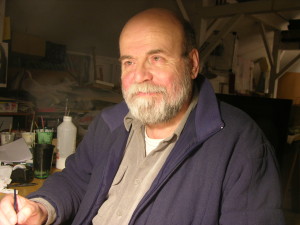 About Jan Sawka: Jan Sawka (Dec.10 1946 – Aug. 9, 2012) was a painter, print-maker, graphic artist, set designer and architect. Sawka’s paintings, posters and prints are in over 60 museums around the world and he had over 70 solo shows at international museums and galleries, chiefly of paintings. Major retropsectives of Sawka’s paintings and sculptures toured American university and college campuses through 1989-1991, starting at the SUNY New Paltz campus and touring the East Coast and American West. The Queens Museum of Art presented a show of his paintings in 1992. During 1991-1992, a major retrospective focusing on paintings toured the Polish National Museums in Warsaw, Krakow, and Wroclaw. Sawka was the youngest recipient of France’s “Oscar de la Peinture” and the award of the President of the Republic of France in 1975 for his painting entitled “In My Head” and “I See A Great Theater.”

Sawka was born in the coal-mining district city of Zabrze in 1946 to an architect father and linguist mother who had been forcefully relocated from their original home-city of Krakow. His childhood was overshadowed by his father’s Stalin-era political imprisonment. Sawka completed two Master degrees: in Painting and Print-making from the Wroclaw Fine Arts Academy and in Architectural Engineering from the Institute of Technology in Wroclaw. By his late 20’s, Sawka had become a star of the Polish Poster School. (His “Exodus” poster was one of just 20 representing the Polish School of the Poster 2009 exhibition at the MoMA in New York.) Sawka’s oppositionist activities and politically charged artistic activities that included paintings, prints, posters, set designs for avant-garde theaters, illustration of underground poetry and the organizing of satirical happenings would lead to his forced exile from Poland in 1976.

Sawka went to France, where he was one of the first artists-in-residence at the Pompidou Center. In 1978, Sawka won the Gold Medal in absentia at the 1978 Warsaw Poster Biennial for his poster design “La Voiture de l’Annee.” Political troubles from Poland continuing, Sawka moved to New York City in 1977 and quickly became part of the American art scene. He produced numerous editorial page commentary drawings for The New York Times and he exhibited his paintings in galleries in New York, Los Angeles and abroad. James Beck, Columbia University art historian and critic at the time, described Sawka as a contemporary Renaissance artist, not only for his creative breadth, but for his well-honed painting techniques.

In 1981, when martial law was imposed in Poland, the AFL-CIO led a bipartisan fundraiser that sold Sawka’s Solidarity poster in the millions to provide immediate support to the besieged Solidarity Movement. The image of a button with the Solidarity-logo as a sun above a landscape of crowd-like trees became an icon of the rebellion.

Sawka’s drypoint engraving prints represent the largest collection of a single artist’s works in the Library of Congress in Washington, D.C. whose curator Elena Millie, called Sawka’s dry-point work “painterly on par with Rembrandt” [in 1996]. Among these is the dry-point engraving series called, “The Book of Fiction,” which later was published in book form by Clarkson and Potter and was awarded The New York Times’ Book of the Year Award in 1986, also winning at the Frankfurt Book Fair.

In New York, Sawka designed graphics and sets for such theaters as the Harold Clurman, Jean Cocteau Repertory and Samuel Beckett Theater. In 1989, he designed a monumental set for the The Grateful Dead’s 25th Anniversary. He continued to make large-scale multimedia, including a set for Steve Winwood’s Traffic Reunion Tour and “Skypower,” projections on Houston skyscrapers for NASA’s 40th Anniversary. At the time of his death, he had just completed a multimedia spectacle titled “The Voyage” that will tour with Grateful Dead drummer Mickey Hart’s ensemble in 2014. For a pilot of “The Voyage,” Sawka won the Premio di Lorenzo Il Magnifico Gold Medal in Multimedia at the 4th International Biennial of Contemporary Art in Florence, Italy in 2003.

In 1993, while Sawka was in Japan on a Cultural Ministry art residency, the Japanese government introduced the artist to various high-tech laboratories, inspiring him to create a multi-media spectacle entitled, “The Eyes,” at the Tadashi Suzuki directed ACM Theater at Art Tower Mito. This was the beginning of his collaboration with Japanese technology studios and corporations, which led to the creation of high-tech interactive sculptures and monumental installations. Sawka designed “The Tower of Light Cultural Complex” for Abu Dhabi, U.A.E., which was presented by Japanese corporations and technology firms to the Royal Family in 1996. In 2004, he created 4 “UMU Sculptures” using the latest plasma glass “SmartGlass” technology.

Jan Sawka’s last award was for his unbuilt design for the “Peace Monument, Jerusalem,” which is a symbol of interfaith unity. When he was awarded the American Institute of Architects (AIA) Excellence in Architecture Award for the design in 2011, the jury comment was, “Poetry and passion… who could argue with this concept?”